Each year, the Walk for Life West Coast  tries to find new ways to get our message across in the sometimes-hostile city of San Francisco. In 2009, we advertised the event with a billboard on US 80, which was seen by hundreds of thousands of drivers: 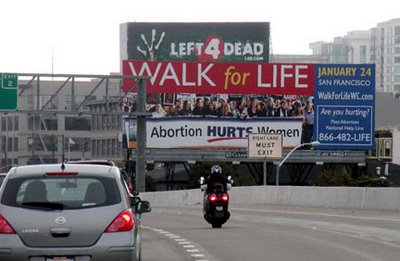 The billboard was effective enough that opponents of the Walk defaced it with paintball guns, although the damage was not too noticeable:

In 2010 we placed large ads on the sides of Golden Gate Transit buses, visible to hundreds of thousands of Bay Area residents in downtown San Francisco and Marin County: 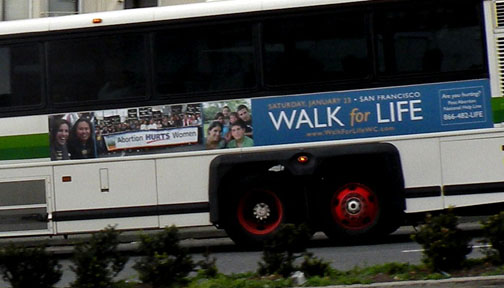 In 2011 it was the “Walk for Life Navy”—a yacht cruising the bay alongside the Walk’s then-route, cheering pro-lifers as they marched along the Embarcadero for the littlest among us:

This year, we decided to hang 50 banners along Market Street, San Francisco’s main thoroughfare, and the Walk’s new route. The banners, as do all our signs, proclaim the Walk’s message: “Abortion Hurts Women”: 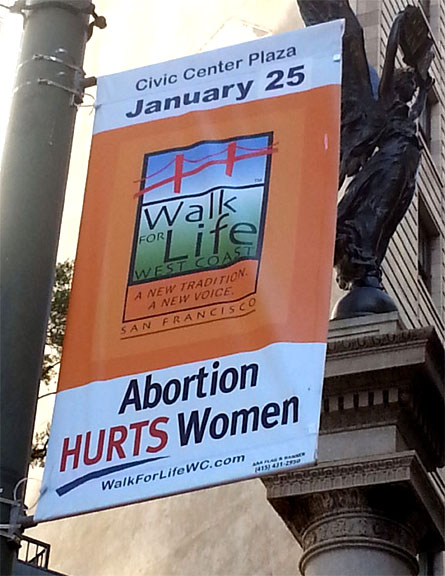 The banners went up on December 26, and have been seen by hundreds of thousands of people. Media outlets covered the banners when the pro-abortion “Silver Ribbon” campaign demanded that San Francisco’s Mayor Ed Lee remove the banners.

The December 31 San Francisco Chronicle reported  “A group called Walk for Life West Coast, which is organizing its 10th annual antiabortion march in San Francisco on January 25, has placed 50 banners along Market Street reading ‘Abortion hurts women.’ They will be flying for about a month….The Silver Ribbon Campaign to Trust Women wrote a letter to Mayor Ed Lee this week saying the banners contain ‘a false and hateful statement’ and demanded they be removed. Ellen Shaffer, director of the Silver Ribbon Campaign, said she considers the banners hate speech against women….”

Eva Muntean, co-chair of the Walk for Life West Coast said “We are delighted with the publicity our banners have already generated. We urge all people of good will to join us on January 25 as we march in defense of the littlest among us. Our opponents seek to censor our message ‘Abortion Hurts Women,’ not because it is false but because it is true. We invite San Franciscans to attend the rally and Walk, and especially to attend the Silent No More Awareness campaign for post-abortive women at 10:45 AM in Civic Center Plaza, so that they may judge for themselves.”

Visit our Schedule page for details of all events.