Archbishop Cordileone “You cannot be consistently pro-life without being pro-marriage.”

LifeSiteNews has an article about His Excellency’s homily at the Walk for Life West Coast Mass as well as a number of photos of the Mass. 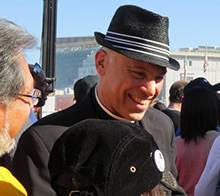 Archbishop Cordileone at the Walk for Life West Coast

“At a Mass held just hours before the 10th annual West Coast Walk for Life, San Francisco Archbishop Salvatore Cordileone praised young pro-life activists, but asked them to “look around and notice those who are your elders here in this church.”

“They are the first generation of pro-lifers,” said Cordileone. “It is no understatement to say to you, my beloved young people, that you are here because of them.”

Standing in front of at least 3,500 pro-life activists at St. Mary’s Cathedral, the Archbishop compared today’s pro-life efforts to those of 40 years ago, noting that the first generation of pro-lifers were “told that you were anti-women, that you were standing in the way of women’s progress and full equality in society.”

“Forty years and 57 million abortions later, the very painful truth has come to light. Yes, abortion does hurt women. And yes, there are those who wish to silence any talk about the harm that abortion does to women. There are a few who would even go so far as to call it ‘hate speech.’”

The Archbishop also tied marriage and abortion together, noting “the whole point of marriage….[is] to connect husbands and wives to each other, and to any children they bring into the world.”

“There is no other institution that does that, that connects children to their mother and father,” he said. “Marriage is primarily about the children, not the adults, such that you cannot … be consistently pro-life without being pro-marriage.”   “In God’s design, it all fits perfectly together,” he said….