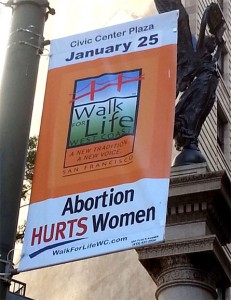 Today KGO TV, San Francisco’s ABC affiliate, reported on the resolution introduced by San Francisco Supervisor David Campos and six of his colleagues which would put the supervisors on record as opposing the Walk for Life West Coast’s now-famous “Abortion Hurts Women” banners.  Further, the resolution would “review the criteria” for accepting banners on public property.

The segment opened with the sentence “When is free speech, hate speech?” (You can see the supposed “hate speech at left.)

Nowhere in the report did KGO indicate any concern that the Board of Supervisors was in the process of deciding whether or not to censor–on public property–speech it does not like.  That was not considered newsworthy, apparently. Real journalists do consider this newsworthy. On Tuesday the San Francisco Chronicle, which broke the story, showed more journalistic responsibility, skeptically noting “…it seems unlikely that city has any legal right to refuse to post something simply because politicians don’t like the message.”

“They fear our message. They fear it not because it is false, but because it is true. They can’t contend with us on the level of ideas, so they try to prevent us from being heard. Calling this ‘hateful’ is  the kind of thing people do when they have nothing else to offer.  We invite anyone who objects to a banner that says ‘Abortion HURTS Women’ to come to the Silent No More Awareness rally which preceded the Walk every year.

Just listen to them and decide for yourself if what you are hearing is ‘hate speech.’”

We welcome everyone to the 10th Annual Walk for Life West Coast on January 25, 2014!